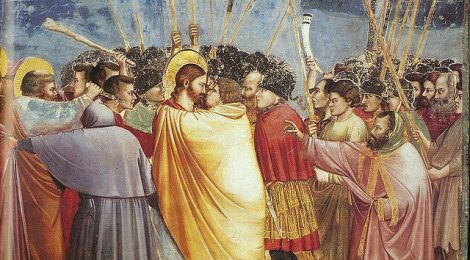 The problem of Judas Iscariot has always puzzled me.  What in the world caused him to turn on the Christ after witnessing all the miracles, hearing his teachings, knowing the Lord himself?  I suppose growing up all my life as a Christian, I just accepted the Gospel as fact.  However, I really began thinking about his role and motivation after the Gospel Reading for Monday’s Mass (ref. Jn 12:1-11) coupled with the Passion account from Palm Sunday.

I don’t know why I never gave much thought to John’s passage.  I think I have more often heard the accounts from other Gospels, but it is clear from John that Judas loved money above all.  He had been thieving from the treasury.  That provided Satan an avenue to corrupt him.

But, why the betrayal?  John 6 indicates that a turning point for Judas was related to Jesus “hard teaching” about the Eucharist.  He was one who was offended by the implication of cannibalism in Jesus words.  I heard one speaker who tied this together with his leaving the Last Supper after witnessing Christ institute the Eucharist at the table.  Still, why did he stick around after the passage in John 6, when so many others just simply left?

He must have had a different motivation.  I began to suspect there was more than just retaliation for Christ’s abominable and cannibalistic words.  Didn’t Judas get exactly what he wanted out of betraying Jesus?  He had to face the Sanhedrin and pay for his crimes, didn’t he?  Then why did he become despondent and ultimately kill himself?  Why did he spurn the money he had earned for his deeds?

It seems that Judas did not expect what ultimately resulted from his actions.  In fact, I don’t believe he thought he was betraying Christ at all!  And this is when the whole affair becomes really sticky for everyone who seeks to follow Christ, including me.  If Judas didn’t understand that he was betraying Christ, could I, too, become a betrayer?

These loose threads I’ve been following all week started weaving together into a whole cloth yesterday.  I was listening to Relevant Radio while I was sewing and a caller called in identifying herself as an older Catholic.  She went on to explain what she had been taught about Judas’ betrayal.  In that day, many people were looking for a political savior.  They expected a Messiah who would free them from the Roman oppressors and usher in an earthly kingdom.  Judas had come to believe that Christ was this political Messiah.

Becoming frustrated that Jesus was making no move to take political power, Judas decided it was up to him to help move things along.  Perhaps, he thought, by bringing Christ into a direct confrontation with the current government, he could force Jesus to act!  I don’t believe he ever once considered that Jesus would simply submit to the Passion that was to come.

After Judas witnessed the events and contemplated his part in causing it all to happen, he was disconsolate.  He still didn’t understand Jesus’ mission, and failed to comprehend how He would yet overcome it all.  And so, he took his life, despairing that there was any hope for his own salvation.

While this new vision of the Passion story makes much more sense to me, psychologically, it sheds some unsettling implications in my life, too.  Have I acted in such a way as to believe that I was following God’s will, and ultimately been betraying my Savior?  I especially contemplate my role as a mother.  Together with my husband, we are called to be our children’s first encounter with authority.  God has chosen us to reveal His person to them.  How am I doing with that?  I call my children to obedience, as God calls all of us to obedience, but do I appropriately understand how that should be done?  Do I misunderstand the means by which I should be accomplish this?  I tend to be a strict disciplinarian.  Do I seek proper balance with mercy and love?  How can I be true to my Savior’s ultimate mission within my vocation as wife and mother?

Every day, I need to deepen my understanding of who God is and what Love does, so that I can avoid misunderstanding His mission and be able to play my small part within it.

← The Same Kind of Meal
Focus on Scripture Friday (vol 4) →