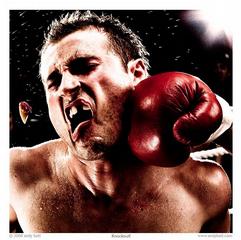 I simply can’t help myself my story makes me break out in a smile; it would be hilarious if it were not me I was watching. Meeting the Mother of God in dream state was just the beginning.  I was a bit of a tough nut to crack.  My next tale may roll some eyes, but I cannot tell a lie.

So I’m in the tug of war zone, me and my charismatic, Calvinistic, holy rollin’, house churchin’, mystical catholic-little-c self, against the One, Holy, Catholic, Apostolic Church.

I could go on and on, and believe me I shall, but since I like to reflect on topics rather than my linear story line, I shall keep to task. I have a thirty inch inseam and that is stretching it.  Once in Vegas I overheard a guy comment on how short my legs were. That was great for football, but trying to leap over Popes, Purgatory, and Priesthood about killed me.

The great showdown: and boy did I loose. Before I could take the leap I got sucker punched that knocked me out for hours.

We all have our Achilles’ heels and boy did I have mine.  My sister strikes again.  I am in a place where my obedience outweighed my fears, that is, I said yes to the Tiber swim, but my sister wasn’t finished with me yet.  She has never been one for subtlety and this time she began laughing at my sacred cow. The young street preacher’s cry, “There is only one meditator between God and man, save the man Christ Jesus!”  Just to hear the words mediator, redeemer, in the same sentence as Mary would make me tremble in fear. My sister took no mercy.

I don’t know how we arrived at this point but I could feel it coming, her secret weapon, before the words came out of her mouth I  literally lifted my hand as if to ward off the inevitable blow. “Mary is Co-Redemptrix!”  Something happened in that moment that is as silly as the stars of the sky, I could only describe it as a Marian love bomb that literally blasted to pieces all my theological hang ups in a whirlwind of fiery heaven-sent Marian  ecstasy. In the hours that followed I had for lack of a better word, a conversion to the Mother of God.

← Virtues; Aged to Perfection
Church History that engages and challenges →