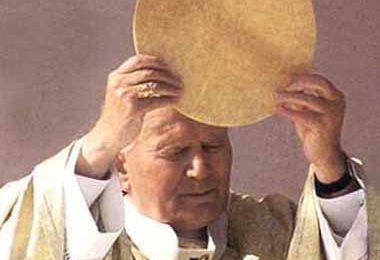 What I will not do is show proof text, early church Fathers; give clear cut historic evidence, for that is a pretty air tight case for the doctrinal truth of Eucharist. I even believed it before I considered being Catholic, at the time I thought, “Well, they got that right.”  What I will do is share another dream I had on my journey to Rome.

Now I had an under-developed, unsophisticated understanding of Eucharist, but I knew it was the Lord.  What I didn’t understand was authority, and the Lord used the Eucharist to tell me all about it.

Is it possible to look for and avoid finding something all at the same time?  Sound strange?  Well, I think that is my story.  I was like Neo in the Matrix, “What is the Church?” For the last seven years before my conversion I must have asked myself this question hundreds of times.

I remember reasoning that if the church is visible, tangible than it must be…..no it can’t be….but what if it is?  One time I got bold enough to grab a paperback Catholic Catechism off the book shelf at Powell’s Book store, only to flip it open straight to the Marian chapters, only to shudder and quickly put it back.

I’ve told my Marian story in some what detail even to the present.  See Tales of Conversion.

Authority was a real stickler to me, as it is to many converts. So here’s the dream:  I found myself in a basement with my father and my two Christian mentors I had over the years.  My father is a lapsed Catholic that left the Church before I was born, only to find himself an evangelical years later.  These three men and I were standing in a circle; my father motions me in the direction of a book shelf, then extends His hand toward the shelf and hands me a book. On the cover of the book it says, “The prayers of the Mass.” I take it in hand to open its contents.  To my surprise it is one big pop up, like a children’s book.

It was an image of John Paul II holding the host over his head!

I awake.  I look back upon the dream and it makes complete sense to me as a Catholic, but at the time I was baffled.

My father is a Catholic, whether he likes it or not.  He was an altar boy; he swore an oath when he married in the Church to raise his children Catholic, and though he failed on his end, my sister and I both converted. The dream was all about authority and where it flowed.  All of these men had real governance in my life helping me on my pilgrimage to the great city of God.  But what my dad couldn’t give me in the waking hours he gave to me in a dream.  It was an image of the height of authority this side of heaven, not even the Pope himself was in charge.   But rather the Host in his set apart hands, flowing through the man in white.

At the time I believed the dream was from God but my heart was not as of yet ready to take in all the implications of the dream. What it did do is challenge me to take up that Catechism again, and this time around nothing would deter me from reading it from cover to cover.