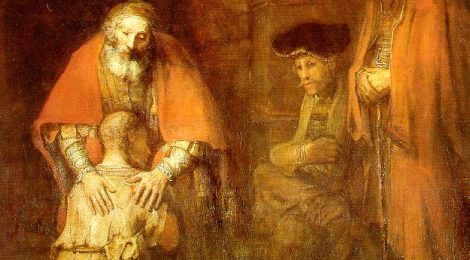 To my Separated Brethren

Steven Thomas / June 12, 2012 / Comments Off on To my Separated Brethren / Apologetics

My appeal would be, do not judge the Catholic Church too hastily.  Stand back and get a little perspective before you draw your conclusions.  The Church is about function and management–a distribution center where man meets God.   We Catholics are often accused of being a salvation based on works, man-centered.

To the first charge I plead innocent; to the second charge I am happily guilty. God became man, redeemed man, saves man through man. The God man gives His saving gifts to man whether through the word of Christ spoken through the power of the Holy Spirit, or the order of the sacramental priesthood given to man.  This is certain.   God has seen fit to use man as the means of saving humanity.  God likes man so much He became a mere man, even placing man on the throne of the universe. What is man that you are mindful of Him, that you became a man.

In a protestant mind much talk is about heaven, a place that only faith can see and salvation is had, true enough. Much of what is done below in church life is seen as fellowship, a brotherhood of faith where a commonality of social experience is shared. I wish to take away none of this.  In fact, we Catholics could learn a bit about community from the protestant experience.

Where I see a breakdown is the exaltation of the intangible in the protestant mind.  Does God forgive on earth through mere man? He’s done every other thing through man, why not? Does He not forgive strictly from His heavenly abode simply between Him and me, man-to-man?  I can remember sitting in a Catholic church prior to my conversion.  I looked to my left to see two doors in a rectangular form that made a sort of strange closet.  I knew what it was, but had never seen one in the flesh.  Near it was an image of, I think, Rembrandt’s prodigal son.

The confessional–I had only observed them in the movies. I got up and opened the door and looked in.  There was a kneeler next to a screen, and two chairs beyond this, an option to greet Christ and have words.

I looked at it for a few moments then proceeded to sit down in a pew.  Looking back in its direction, glancing at Rembrandt’s image of reconciliation, I felt the weight of the beam.  I started to weep uncontrollably; I think I had my first Catholic confession protestant style.  Caught in the middle of seemingly two worlds that is really one world even if imperfectly.  I was a Catholic whether I liked it or not, to be Christian is to be Catholic, even imperfectly.

If perfect contrition is required without sacramental absolution from a Priest, I think that was what I received that day.  It had happened before in years gone by, but not here in this place next to this Catholic rite of mercy and love.  I was not even asking for forgiveness, nor did I know I needed it. All I could hear is welcome home. I was the prodigal son outside of my Father’s household and didn’t even know it.

The faith, once delivered to the saints, is tangible; it is a meeting ground of heaven and earth, where heaven makes flesh even in the sacrament of confession.  When Christ left He gave men, His men, all authority, even to forgive sin.  Those men are still here today, acting on behalf of the Son of Man. It is not the Priest doing the forgiving, but the authority of Jesus Christ within the body of Christ doing His work through these men, to set the captives free even unto the forgiveness of sin.

Forgiveness of sin does not belong to the Priest.  He is entrusted with the responsibility to hear and grant absolution.  Forgiveness belongs to Christ and His Church, through the mighty power of the sacrament of reconciliation.

God the Father of mercies, through the death and resurrection of His son, has reconciled the world to Himself and sent the Holy Spirit among us for the forgiveness of sins; through the ministry of the Church may God give you pardon and peace, and I absolve you from your sins, in the name of the Father, and of the Son, and of the Holy Spirit. Amen.

Don’t be afraid!  The God-man loves to use man, even for salvation, a mediator of the mighty Christ, on behalf of His Church made up of man.