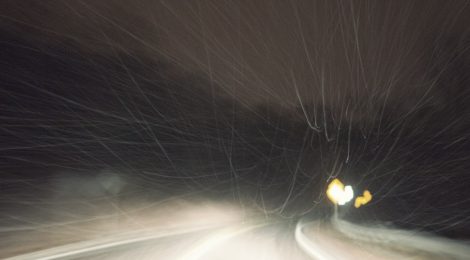 Years after my first tentative steps into communion with the Saints, I found myself alone, in the middle of the night, driving through a snow storm, through unfamiliar back roads. I checked my directions once again. At least, at this hour, I could drive as slowly as necessary to read the infrequent road signs. I stopped and shone my headlights so I could read the next street sign.  I dialed my senior midwife, but she couldn’t tell me where I was at, nor how to get where I was supposed to be.

Mentally, I flipped through an inventory of names of the Church Triumphant. Well, I couldn’t get any more lost, so how about St. Anthony? A quick petition, and I turned my car around once again, looking for the road I must have missed. Panic was growing as I worried about the birth I was likely to miss, as well.

I slowly retraced my path and around the bend I noticed a car still sitting beside the country road, which I had passed previously. This time, I also noticed it was a sheriff. I pulled over on the other side of the road, and before I could get out, the sheriff was approaching my vehicle. With relief, I handed him my directions and the address I was searching for.

Initially, even he was confused, and then he realized my error. There are two highways to the city and outlying farms I was searching for, with exits a few miles apart. The first highway skirts the right of the city and the second skirts the left. The numbers only differ by a single digit. I had taken the first exit, when I should have taken the second.  Even more confusing, the county road I was on runs right across both highways, so while I was on the road the directions had indicated, I was miles and miles away from where I should have been. This being my first birth up in this area, I had no understanding of the lay of the land.

The sheriff soon had me back on the right path. I did, in fact, miss the birth, but that probably would have been inevitable. My senior midwife arrived after the baby, as well. I’ll never know why that sheriff was just sitting there, in the wee hours, in the middle of absolutely nowhere. But St. Anthony knew.