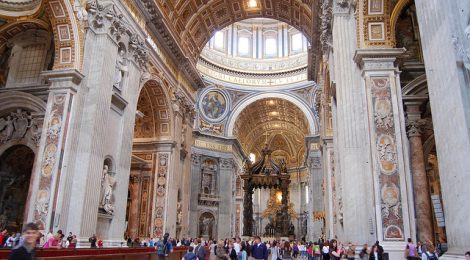 Thy Kingdom come, thy will be done.

Look, God loves visible reality, heaven and earth are connected, and there is coming a day when these two worlds will become one in perfect unity. But for now His kingdom makes flesh through the Church, and yes it is visible in time and space just like every other work of God in human history.

His Church is no more hidden than the people of the Old Covenant. The Catholic Church is an extension of His kingdom in time and space governed by men. Protestants fail to see His Kingdom in plain view.  It is akin to the Israelites grabbing the torah for themselves and casting off the Aaronic Priesthood because the tribe of Levi had too many hypocrites.

This is nothing short of the blind leading the blind.  Just think, they separate themselves from the Kingdom because they don’t like the steward.  Thank God for the mercy of God!

Stranger still, the Catholic Church extends the Kingdom making the King incarnate so the people of God may become what they eat, the risen Christ, becoming one flesh with God.  The Kingdom makes flesh through saints, signs, and wonders, and they roll the eye and question the source of the fantastic as if it was from a devil.

The King’s mother has already received our hope of glory, and we see her in measure in her celestial beauty, again the glory of the Kingdom coming to earth, and they run away in fear of the first fruits of their resurrection.

It makes you wonder at all if they really believe He established a Kingdom?  Instead of embracing the substance of the Kingdom that comes to us in time and space they obsess over talking about the Kingdom in which they don’t even believe in, right in plain view to all, as if it were a far off land reserved for another life.

They call the Kingdom of Christ mere man, they reproach His mother as if she was a lying spirit, and they shudder at our miracles, and call His Kingdom of human origins or something worse.

‘We don’t want your Kingdom furthered in the means you have chosen, great King.  We know better than you.’ We shall start our own kingdom and call it god-little-G.  We last for a generation or two and do it all over again for the last 500 years until we number in the thousands all claiming to be the steward of the house of faith in our little bubbles until they soon pop and are long forgotten to history. If one thing is certain amongst them is this, everything is invisible except for a few bubbles floating around. And nothing makes flesh because it cannot, and why not?  Because their labor and work is not the Kingdom in time and space, but an effort to touch a world yet to be.  Little do they know all the work they do is the Kingdom in time and space even if their efforts are from a warped intellect.   That is, God’s Kingdom works through them in spite of their sad view of His Kingdom, because He is mercy and love. Like a Father accepting a child, even if that child repudiates His house.