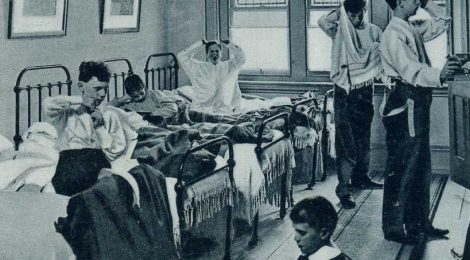 Bekah / August 29, 2012 / Comments Off on The Bedroom Shuffle / Marriage and Parenting, Vocation

One of the complications of having a large family is where to sleep everyone?  Room-sharing, for most of the kids, is mandatory.  But as oldest children reach their teens, it starts becoming less workable to have a preschooler in their room…and their stuff.  Then there are the babies.  It seems that right around a year is the time when our babies no longer tolerate sleeping in Mama’s and Daddy’s room, or rather, the movement back and forth from the bathroom and even low-toned prayer and conversation as we turn in for the night disrupts their sleep.  So for the last few weeks, we’ve been figuring out new sleeping arrangements and today we made the big transition.

Getting the twins to sleep was the most immediate problem to be solved.  So several weeks ago, we ‘temporarily’ moved 15 year old Oldest Son downstairs into the laundry room–originally an undersized guest room which we converted.  Oldest Daughter, 13 years old, felt gypped, of course.  That’s what being a 13 year old girl is, figuring out that the world does not revolve around you, and despising that fact!  But as 4 year old Second Daughter dumped her dresser for the third time in a week, I decided she did have a point.  But how to work all this out?

We’ve got 3.5 bedrooms available for 8 children.  The math is rather sticky.  The three Middle Boys are settled in the largest room, and with only a 4 year span between them, it works rather well.  Oldest Daughter and Second Daughter have been sharing the second largest room at the other end of the house from us, while Oldest Son’s former room is next to ours, but quite small.

A tape measure confirmed, however, that the full/twin bunk will fit in this room…just barely.  So the new room assignments are as follows: Oldest Son has found the laundry room quite to his liking.  There is an air conditioning/heating vent in this room, which some of our other bedrooms do not have.  So we completed the transition to his permanent residence there and emptied his former bedroom.  For the time being, Second Daughter will have her mattress and box spring on the floor, until the big bunk can be disassembled and moved.  The twins cribs are already in the room, but will be taken down when the big bed arrives.  Oldest Daughter retains her room and gains freedom from little sister.  She’ll eventually need a new bed and frame, but we’ll make due until then.

This afternoon, I put one twin down for her nap, and then when I brought twin two up, Second Daughter had also snuck into the room for a rare mid-day nap.  So far so good, but the tricky bit will be bedtime.