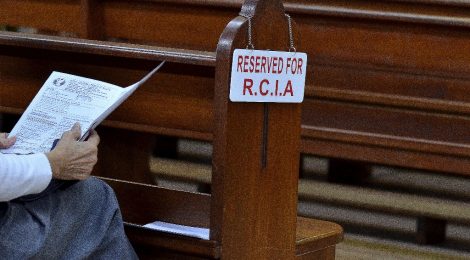 For a Catholic convert, many challenges and obstacles inevitably arise.  Some are predictable, like the protestant pastor who must lay down his calling, or the life-long Christian who is now out-of-step with family and friends.  Others suddenly appear just when the road to Rome seems clear.  For me, RCIA was one of those obstacles. RCIA stands for Rite of Christian Initiation for Adults.  It’s original purpose was to introduce the faith to interested individuals and prepare them for the reception of the Sacraments of Initiation:  Baptism, Confirmation, and First Eucharist.  In my class, we had two distinct groups of people, those who were marrying into the Church or were just beginning their inquiry into the Catholic Faith, and those who had become convinced of the Truth of the Church and had been studying the Faith in exhaustive depth.  Really, it is impossible to adequately meet the needs of both groups of people.

The program is originally designed for the uncatechized, unbaptized individual, but has become a catch-all for anyone of any background desiring to be united with the Church.  That is not to say that there is no spiritual benefit at all to the program.  For the mature Christian, it can be a time of filling in the gaps, reflection on one’s journey of faith, an avenue to increasing the faith of others through sharing our own learning and experience, but most of all, I found it a trial of patience, obedience and submission.  To be fully united with Christ, to share intimately with his Body, Blood, Soul and Divinity, I had to submit myself to the process of the Church.

The very first Mass I attended after having my conversion experience was during the beginning of the Easter season, so after realizing the truth of the Eucharist, I agonized to receive Him for an entire year.  Yes, it made my Joy even more fulfilling and complete at my Confirmation at Easter Vigil, but was this a necessary trial of my faith?  A valid proving of my devotion?  I offered it up, but found it difficult to not be resentful.

The program itself began with the idea of Faith, and didn’t even introduce Catholicism in the first lesson.  We were given a copy of the Catechism, but when we quoted it, were told it is not binding teaching.  Yes, our parish hovers on the brink of orthodoxy, which itself is a cross.  The priest at the time was a good and holy man (who has sadly been replaced with a priest who openly challenges the hierarchy and some doctrines of the faith), but he didn’t attend most sessions, but left them to the lay minister to lead the group.  It would have been more confusing and shocking if I hadn’t discovered a Catholic message board which prepared me in advance to expect what I found.  Had I not had a friend with which to commiserate and support each other, it would have been much more difficult.  I’d largely characterize the experience as a journey through the wilderness, not being wholly one thing or the other, forced to be separated from the Body, even while fully embracing the Faith, while others share in Him freely simply by virtue of their birth.