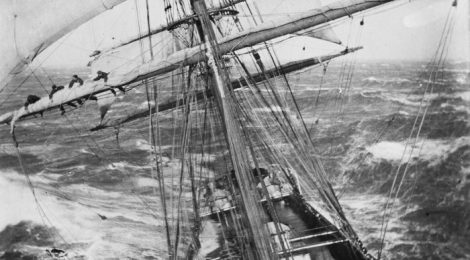 Reflections Genesis 7–Safety in the Ark

Steven Thomas / September 4, 2012 / Comments Off on Reflections Genesis 7–Safety in the Ark / Through the Bible

Floods are coming upon the earth, but there is an Ark of God for our time in which we may find rest.  The Barque of Peter sits amongst the tumultuous seas of humanity, offering safe harbor for the weary traveler to Zion.

The seas part before its holy shrine, where the Lamb of God who takes away the sins of the world resides.  Come to the ship of ships, the barge of all the ages of men.  Go in, friends, to the household of faith.  It is large enough for you and your whole house.  The numbers it has held are not numbered in a single family, but rather the whole human race.

Friends, the Ark of God was made for those within–a custom design, suited to the salvation of souls.  Peter’s Barque is the safest place to greet the King on our way to Zion, for it is His ship, fashioned from His wood and nails, built with His blood and sweat.

Many have fallen to see its survival; others gave their lives to preserve it.  The Ark of God has remained for two thousand years.  It is unsinkable.  Nothing will take it down, for it is held together by the wisest of God’s men.  Not only has our great Captain left us with the blueprints for its design, but has chosen men to build it just as HE chose Noah.

Will we trust those God has charged with His vessel?  Or shall we trust in our makeshift rafts to keep us afloat?

Perhaps in calm waters one may survive for a time, but when the waters get rough these rafts shall break apart under the waves.  So many Christian souls floating about on dry wood with a blueprint in hand crying safety, this is an illusion!

The Barque of Peter is sure footing for one to stand, a place for all to come.  Make no mistake the waters will only increase in violent storms.  The plates of civilization as we know it are shifting right before our eyes, causing great waves and dangerous tides. Christian civilization is breaking apart in the western world as we know it. A tide of secular spirits is engulfing the waters of the world, a flood of loss and misery has already taken many.

It will only get worse.  Who will survive?  A time is coming and now is when the great Captain is calling His people back to His Bark, His mighty oak!

“Now, my children,” declares the Lord.  “Enough, rise up and take your place as sons to a Father.  Where is your faith?  Stop doubting and believe.  It is my ark made for you and your household.”  The Father calls forth from the North, South, East and West, “Stop usurping my household and take your place amongst my children.  Now is not the time for arguments, now is the time to get ready for what is coming to the earth. Satan has been released for a final strike.  Get in my ship or be overtaken by the waves. My command is firm, I shall not encroach upon your will.  That is your encroachment on your own will, and your willfulness shall be your own demise,” declares the Lord.

Friends, Noah was not taken from the great deluge but he and his whole household was preserved through it.  The Barque of Peter is our Ark; this is the way, as the Son of God is the way.  When the floods come, Peter’s Barque will be the only safety against the tidal wave that is coming to consume the world with antichrist.