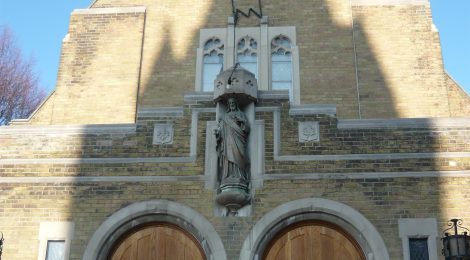 Those of my friends that have entered into sincere dialogue with me about the Catholic Church get close and begin to shudder in fear, like it’s just too much to believe. Mary, purgatory, priesthood, and the list goes on for a while depending on who I’m dialoging with.

What is even more startling is the world in which they live, varying in degrees of heterodoxy that, in short, blows my mind.  You want fear and uneasiness simply look at your crazy Christian movements and line them up with that book you say you love so much.

To be a Protestant on a quest for truth and fulfillment in Christ is the strangest creature this side of heaven.

We Catholics submit to a Kingdom that has been growing for thousands of years.  It is tangible, our practices and beliefs are backed by Apostles, early church Fathers, magisterium’s, councils, creeds, mystics, saints, and finally the witness of the faithful  living under the Kingdom of our Lord Jesus Christ.  A living breathing Kingdom of God, our longevity and growth gives evidence to this.  Our governance reflects that of an eternal Kingdom manifesting in time and space.  Our liturgies image the book of Revelation, on earth as it is in heaven. For fifteen hundred years we celebrated together and still celebrate the sacrifice of our great King made present for us in time and space.  Our faith is proven by the slow hand of time, and the gates of hell shall not prevail against her.

To remain a Protestant you must believe:

That Jesus didn’t establish a visible Church, unless of course your visible church started a generation ago is His visible church

That Christ’s authority really wasn’t given to the Apostles as men, but to what was written by them and others

That His body broken for you really isn’t His body, even though this was always believed historically

Direct disciples of the Apostles were heretics and wolves

That Christianity was in darkness for countless generations

That history is of little worth

That individuality takes precedence over against unity

That either God is indifferent about faith and practice, or everyone else is wrong.  You won the egotism lotto if you take the latter view.

You are fallible as a person, but infallible when choosing your form of Christianity

Nothing may stretch you beyond what you understand

The gates of hell prevailed against the visible Church

Belonging to a church is like shopping for the right one

You decide the right one

You are the final word on the right church

Truth of the Kingdom began with your literacy and the bible

Most of your communities have no more history than a generation or two from your last church split, and God is OK with it.

I ask you where do you find this conduct, worldview, self-absorbed egotism present in the bible amongst the faithful?  How could this behavior be seen as a safe alternative to the Catholic Church?

Protestant doctrines may make sense to them at any given time, as each individual in their fallible mind thinks.  But the substance of their sociological anarchy, their movements manifesting and splitting every generation, their shifting sand dogmas and doctrines that are nothing short of theological anarchy, make no sense at all.

One image reflects a Kingdom of thousands of years, while the other represents physical chaos to the point of an absurd display of children forever bickering about who sits on the throne.  Is it really that complicated?

If we removed the notion of doctrine or liturgical tastes in worship from Christianity, and observed the visible Church in light of a Kingdom alone, it is as clear as the sun that rises.  Protestantism is a world of gnostic shadows.