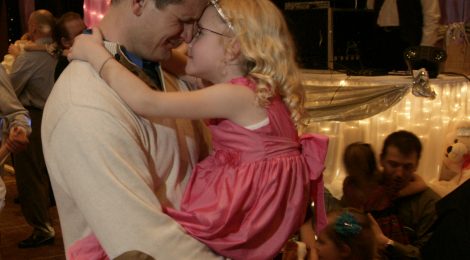 Once there was a Father and a Daughter.  When the Daughter was young, she loved her Father more than anything in the world.  Compared to all the other Fathers, her’s was radiant.  When he awoke in the morning, he set the sun in the sky, and at night she loved nothing better than to snuggle in his lap and tell him her most secret thoughts.  The Father had many children, but he knew how to make each one feel the dearest to his heart.

She grew older, as all children do, and though she no longer lived in her Father’s home, she made time every day to visit with him.  She would share her joys and her trials, and he always knew how to turn her sorrows into gladness.  He loved to give her gifts, whether it was produce from the garden or something special that he chose just for her.

The house was often full with members of the family coming and going, but there was always room for her.  Because of the size of the family, routines often developed so that things would be done ‘just this way’ and the familiarity of the routines brought a cozy sense of belonging.  There was always a meal being prepared, and the Father would take a special moment to share his wisdom at the table.

But as the Daughter grew older, other things began to interrupt the time she used to spend with the Father.  First it was occasional work commitments.  Then, because she worked so hard, she found she lacked the energy to make an extra trip home.  Sometimes, she just plain got distracted by other amusements.

She continued to show up for the biggest celebrations, the Father’s birthday and the anniversary of the wedding, but one time she came in and realized the routines she was used to had changed.  No longer did home feel familiar and cozy.  She began to feel foreign.  And there were so many more relatives that arrived for the big parties, she felt lost in the shuffle.  The Father continued to send gifts, but sometimes she wouldn’t notice for days at a time, and then when she’d find them, she’d wonder where they came from.

When hard and terrible events arose in her life, she would look back with comfort on all the times she spent with her Father, and know that he loved her.  She thought by following what she remembered of what he had taught her, that he could continue to guide her has he had done so excellently when she visited him frequently.  But it wasn’t the same.  She tried calling him on the phone, and sometimes it felt like they were in the same room, but often the noise of other family members or just plain old interference on the line made it difficult to hear his voice.

The Father missed the Daughter terribly.  Even though she never knew, he always noticed when she would return home, no matter how many others were there.  His heart longed to give her the gifts that she no longer came to receive.  He hoped for the day when she would recall that she was most fulfilled when she came frequently into his presence, and they could regain the relationship that they once had. Until then, the Father waits, the door open to welcome her, and a meal ready to fill her belly.