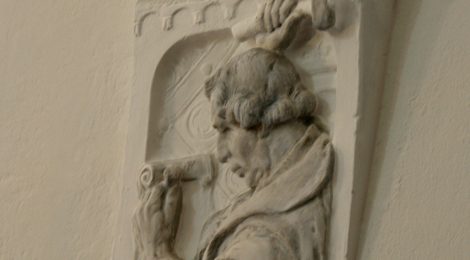 In the Breaking of the Bread, part 3

If you missed the others, here are part 1 and part 2.

Up until this point, I had examined strictly protestant churches.  Growing up in a firmly protestant home with generous helpings of Christian schooling, including celebrating Reformation Day complete with live Martin Luther impersonator, I knew that our faith derived from Catholicism.  After my parents divorced, my dad and I attended a Lutheran church for a short period of time.  Something about the traditional worship of that church fascinated me, so I decided to delve into the Lutheran world.  To me, it made sense to go back to the beginning, and submit to that Church, and as a protestant Luther was the beginning.

I spent a lot of time on the internet examining Articles of Faith and all manner of investigation into the various branches of Lutheranism.  We have a WELS Church here in town, which is one of the stricter branches.  We began attending worship with our family, and I even explored a day time Bible study.  The pastor noted our interest and we invited him over for a deeper discussion of the Lutheran faith.  In my learning, I had stretched myself to make sense of paedobaptism, and consubstatiation in the practice of Communion.  These concepts were difficult for me to accept, yet in my new appreciation for submission I examined the Scriptural basis and came to accept that there was a reasonable defense for the baptism of infants.  As far as Communion, I had already come to believe that there was a much more significant and deeper meaning to the rite, and was glad to see the Lutheran teachings.  But I addressed my two biggest hurdles with the pastor when he came over.  He confirmed that within the WELS doctrines, members were strongly discouraged from prayer with other Christian believers outside of the WELS membership.  This meant no non-denominational Bible studies, no inter-faith worship, no attending Church with my family when we visited, no weddings, funerals, etc. etc.  I found this very troublesome in a protestant Church.

The other doctrine I struggled with really had no relevance to my life, but cast a certain light on the Lutheran Church that I felt disturbing.  In clear print, they denounced the Catholic Church, and the Pope specifically, as anti-Christ.  Yes, I agreed, the Catholic Church was in error.  But so was every Church I’d encountered in some form or manner, and really couldn’t see how that should single the Catholic Church out.  I understood that historically, Luther had strong convictions to separate from the Church, but now, still, to declare the Church and the Pope anti-Christ?  This just didn’t sit well in my soul.  Worse, when I addressed this question to the pastor, he squirmed and gave a half-hearted answer and changed the subject.  Well, if this was so important that it was incorporated into the founding documents of the Church, why was he so uncomfortable addressing it?

Almost in that same instant, my friend breathlessly announced an astonishing fact.  She had discovered an account of a Christian converting back to the Catholic Church!  Not only that, but she’d found a whole book of stories of similar conversions.  We both boggled at the madness that could turn 500 years of history on its nose and send a person back into the Church from which we were accustomed to people being rescued.  What in the world could be driving that decision?  All my life, I’d heard the testimonies of people saved from the Catholic Church into the personal relationship with the Lord Jesus Christ that our protestant Churches proclaimed.  I remember sitting as a child in Sunday School class, and watching my teacher point across the street to the Catholic Church and hearing her say that those people were going to hell.  And people willingly went back there?  Were they trying to save cradle Catholics?  I barely could contain myself as I waited for her to finish with the book, so that I could read it.