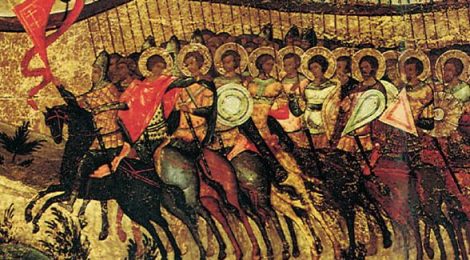 Bekah / June 6, 2012 / Comments Off on Preparing the Church Militant / Reflection

Steve gave me a book yesterday, Exorcism and the Church Militant.  As I began reading today, I immediately encountered this passage, subtitled The Authority of the Church Militant.  It dovetails nicely with the recent questions Steve has brought forth, focusing on why Catholics may leave to worship at a different church.

There is one spiritual force on earth that can counter the hubris of Satan and his apostate angels and conquer them. That force is the “One, Holy, Catholic and Apostolic Church,” which, in my opinion, has been singularly unprepared for and unengaged in the hard work of spiritual warfare since the Second Vatican Council. By this I mean that if the institutional Church on earth were ever to train its members to be spiritual combatants and aggressively apply its great authority against the power of evil in this world, the evils mentioned above would simply not be able to exist in their potency or scope. As it is, the Church has yet to seriously enter the battle and become what it is called to be, namely, the Church Militant.

I can attest directly to the truth of this. I have never encountered spiritual attack like I have since I converted into the Church. It didn’t happen directly, but began around the second anniversary of my reception. It grew slowly over time, and I began to question my faith, my reason, and even my sanity. If this is an example of how successful attacks from our enemy can be against a well-catechized, Bible-wielding, devoted Catholic-convert, then how much more the cradle lay Catholic, who has been brought up in the recent dearth of catechesis?

Yes, we are routinely inoculated with frequent reception of the Eucharist and publicly proclaimed Scripture and Gospel, but this is all undone by the priest who announces his rejection of the hierarchy of the Church, and the embrace of modern tolerance, equating sin with selfishness.  A father who leads by example, initiates the laity in the process of picking and choosing, knocking down the walls of the sheepfold, opening wide the gate for the lion to have a veritable seven-course banquet of lambs.  Appeals to the Bishop are roundly ignored with instructions to address concerns back directly to the priest in question, and the priest in question mocks the “traditionalist”* from the pulpit.  Such is the state of the Church in at least one particular parish.

We know this is not exceptional.  The virulence of attack is all the more evidence for the truth the Church proclaims.  The enemy does not defeat himself.  But we faithful, as a rule, are unprepared and even now are reluctantly acknowledging our lack.  Recently, the sleeping giant is awakening, with our freedom of our religion being attacked by government intrusion.  Too little, too late?  Our faithful don’t care about doctrine they’ve been trying to forget exist for decades, priests and laity together.

We are called to be Militant!  It is not  out of animosity or grievance with the Church that we question, “Where is the passion?”  It is out of love for the beauty of the priceless pearl we have found, only to encounter ones entrusted with its care who have decided that she would be more beautiful with a little bit sliced off here, or an adornment covering up that bit over there.  Pretty soon, it is unrecognizable as a pearl at all, but laity are supposed to filter through all that and still believe that the source and summit of our faith is true and unquestionable.  Is it any wonder that His Presence on the altar becomes doubtful?  For those who love the Church in all her authority, is your love and joy palpable?  I’ll admit, mine was faded.  Thanks be to God, He has rekindled that passion!  By His mercy, it shall remain.  How can we effectively evangelize and equip both those within and with-out, until our joy is vigorously displayed?  Come, Holy Spirit, renew the Church!

*Note, I am not referring to a Mass preference, but to a state of heart that seeks to be obedient to the Church–Scripture, Magesterium, and Tradition–in the sense that Steve referenced in Clarity 5.