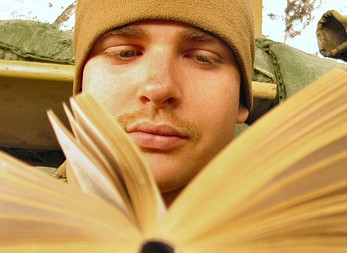 Take up and Read

…What it did do is challenge me to take up that Catechism again, and this time around nothing would deter me from reading it from cover to cover…

My reasoning, this Catholic Church deserves an honest consideration.  They were the only thing in town for 1500 years.  Over the years, I had read many authors from their camp that they called ‘saints,’ and why in the world did these men and woman seem to plumb a depth that I could find in no other communion?  They were building a strong case for beauty.

On the outs, I never was comfortable in any protestant camp, not because of the doctrine taught in a positive sense most of the time. More often than not it had more to do with what wasn’t taught.  Like a half-written thesis to the question of Christianity.

Then there was the barque of Peter–immense, 2000 years of grappling with a faith born as a seed that grew into a tree that covered the face of the earth. It was never negation or absence of clarity I struggled with on any point I could consider or even imagine, but the radical claims they made.

Could it be that they saw further than little old me?  I was always stepping out of the boat to meet Jesus on the rough sea of faith, turning back to safety at times, but I would try again and again.  The closer I got to Him I saw things that appeared to look like a Roman ship.

So what did I see before the ship came into focus?  I saw a Eucharistic Lord, in a primal understanding of what it was.  I saw liturgy of worship, from Revelations to the early church Fathers.  The most interesting thing I saw came in a dream, one of my first on my way to Rome.

I was doing ministry at the time with a group of friends in Portland Oregon; we were doing outreach to the homeless youth. In the dream I saw a four-way highway bridge above us.  We were working on a two-way bridge that was incomplete below. The image changes and I’m standing in a grass field, and there is a bridge built into the earth, fashioned with stones like a buttress, grass and moss covered it as if it was a part of the natural habitat, man-made, but it brought beauty to the surroundings.

On awaking I knew the bridge was ancient, so ancient it could even go unnoticed, even taken for granted like wild flowers along the highway.

Blinded by the obvious is a dilemma in all of us.  If it’s too close, we can miss it.  No man can see the eye he observes the world with, unless he finds his own reflection. To really stare at the image, first he must take the planks out of his eyes and be open to sight. Sometimes the Lord is merciful enough to spit in the dirt and rub in our eyes and declare, receive thy sight.

My mirror was the Catholic Catechism of the Church, only it wasn’t Augustine hearing take up and read, in the distance reaching for an epistle. But it was me hearing the voice of my Father, take up and read.  Pressing into every page, wrestling in the early morning hours, saying yes and amen.

It started in articles 963-972. I was in a park at dawn.  I had made it this far there was no stopping me. My fists began to grip the pages like I was holding on for dear life. I felt so much tension in me with every sentence I read, I even began to shake.  Before I finished, I cried,  “It’s true!  It’s true,” and began to cry.  As God is my witness, at 32 years of age, I literally climbed a tree with the faith of a little child, declaring to the quiet morning sky, “Its true!  I believe!”