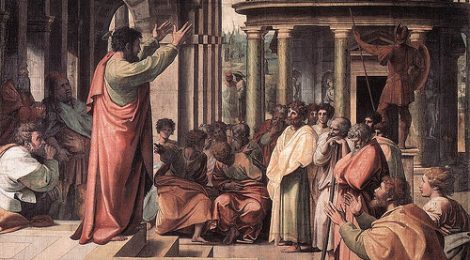 We had been praying, and I was being asked to do what I thought at the time, was unthinkable. Now my wife is not a prophet, but this morning she spoke a word over me. She says, “I see you walking through a translucent door full of light.”  She then starts challenging me to walk through it. I knew what the door was and what I was supposed to do.

This was thirteen years ago, and it was one of the most special days of my life. Perhaps the most frightening thing I’ve ever done.  I am shaking in my sandals, standing on the corner of Burnside and Division St.  People in transit, a congestion of human bodies, so afraid of what I am about to do.

I take a step forward and begin to raise my voice, and then it happens. I am baptized in heaven at that moment. I can’t even hear what I’m saying; all I know is that I am covered head to toe in the glory of God, declaring the mysteries of God I had stored up in my soul over the years. There was so much joy when I stopped speaking, my best friend and I danced around in a circle like little kids.  For the next couple of years you couldn’t shut me up.

People, even Christians, may scorn the street preacher, but I cared not. To this day, I look back on that season in my life and can testify that I never had so much interior grace to walk in that power and glory of God.  I had become a fool for Christ, and I had never been so happy. It ruined me for anything else.

Strangely enough, that season came to an end abruptly, and God told me I was going into hiding to learn a deeper sanctity from within and without. It’s been eight long years since that time and I have been hidden like I could have never imagined.

One time on the street, I challenged a young man to give his heart to Christ, and he began to quote the scripture about turning the other cheek. Before I could say a word, he struck me in the face, and then came back with a back slap; I was in shock as he walked away.  In the moments that followed something happened that has never left me, even the love of the Kingdom of God.

You know the text, blessed are they who are …….but this was not what was so profound in the moment it was what came with the passage.  I felt nothing short of a bear hug from God the Father, like I was being squeezed by love itself.

I think there is a correspondence between heaven and earth, radical acts of faith and love beget from heaven a radical response.

One time I prayed through the night and went down to the city square to proclaim the risen Christ. When I stepped off the train, I was covered in an orb of glory all morning, it lasted for hours, usually when I’d feel the power like this was when I was preaching, and often I would feel the power leave me when people were engaged with what I was saying.

It was like I was a funnel. If people were open to receiving a drink the power would release right out of my body. The more peoples hearts were soft, the more glory would flow.   It reminded me of the bleeding woman, when Jesus cried, “Who touched me?”

The Kingdom is a strange thing to us down here. Once in a while these incidents happen, these days usually with my kids, when the grace of God is moving in their life, but it is quite uncommon.  When I was in the streets it happened daily.  When it came on me as presence, it was related to some act of faith or some extraordinary sacrifice I had made.

Now all of us can share in the abiding presence of God, this is our right as children–fellowship with God that abides in love–but that is not what I’m talking about.

I’m talking about Pentecostal power.  This power would manifest on me when I was being verbally assaulted as well, almost like a force field, like a wall of heaven’s protection when someone was spitting curses in my face.

This is another principle I observed about the power of God, the more desperate the situation, the more glory.  Heroin addicts, prostitutes, and the demonized that wanted deliverance, were given the grace for freedom.

One time a heroin addict came into my house. I looked at him. This was not uncommon as my house was filled with the broken and needy outcasts; they had acquired the name gutter punks or crusty’s.  I could feel so much glory leaving my body just looking at Him I could barely stand, literally.

I have longed in my heart to return to this population, but at least in this time is wasn’t to be.  A husband of twelve children and a wife of twenty years, exhaust my time.  It would take nothing short of an economic miracle to send me back.  But if that was God’s intention for me I believe it will happen, even if I can’t see how.

Over the years I have wept for this population. I belong in the streets, I have often felt–in the trenches of the earth, where hell has taken captive souls, precious in the sight of God, so much mercy, so much love for these children lost in a world where Satan is enthroned.

As of today I’m not sure what God is doing in my life.  The only thing I’m sure of is that my time in hiding is over, and my call to preach the unsearchable mysteries of Jesus Christ is alive and kicking.

I have over the years been waiting in the upper room for the directive.  What I did not expect is that I would be waiting for so long.

In the last few months I have begun to see the signs of God forming a team of laborers amongst us.  I’ve had my fair share of Ishmaels and I have learned to wait for the real thing.  What I do know is, I and you would do well not to presume when we see God begin to move, embrace His positioning as such, but do not presume where it is all going,

Apart from Him we can do nothing.  Know the seasons when they come and go with Him. And if you ask where are we going, He will more than likely say, come and see.

← Out of the Grey
Book Talk Tuesday, Introduction to the Devout Life, Part 1, Chapter 14 →