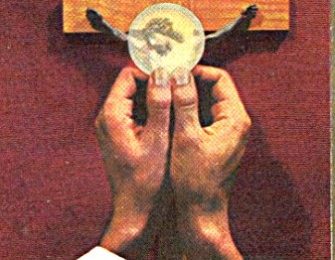 No blinders.  No closing of the eyes.  Let us look straight into reality and draw our conclusion. Church history is no prettier than the average Christian life, with its ups and downs, failures and triumphs, cowards and heroes, saints and sinners, and everything else in between.

What has been constant from the beginning according to our earliest leaders and theologians is this,

THEY BELIEVED THAT CHRISTAN WORSHIP WAS SACRIFICE, WHICH GOD MADE FLESH, LITERALLY, AND THEY ATE HIM, PERIOD.

All of Christendom spread to the ends of the earth through idolatry as the central means and height of worship toward and through the God of the Christians.  A Kingdom built on a lie, who could build such a Kingdom?  And if the father of lies built such a kingdom than you are not exempt from it, for you are a part of it, even if a mutation, if you call yourself a Christian minus Catholic.

Get a hold of this, my separated brethren, if you can.  Christianity as a civilization was built in and through idolatry, if Christ makes not flesh on the altar. Patrick, Augustine, Christendom, Polycarp, Ignatius, Francis, Thomas, worshiped bread and wine– idolaters.  Your bible was compiled by idolatrous Bishops.  Your Trinitarian formulas were worked out by idolaters.  Our early creeds, Apostle’s and Nicene, were worked out by idolaters.

The heritage of Christianity itself is idolatry, from start to finish, as its source and summit!

Idolatry is a terrible evil before God!  Would God support such a movement that worshiped bread and wine as God?

You may try, but you cannot have your cake and eat it, too.  Liturgy, divine worship, sacrifice, priests, worship of God in the species of bread and wine, is Christianity.  Without this, Christianity ceases to exist in history.  Worship of the Christian God stops, and there is no Christian story to behold or told.

Talk about a mind freak.  In the protestant mind history stops at 100 AD and begins again at 1517, but God and altar are gone and all that remains is doctrinal opinions and a song or two.

Our Church has grace recognizing man’s weakness to believe, that ascribes the through-no-fault-of-their-own clause, that means their guilt is lessened due to circumstance or place of birth. But the great break was not with men, but with God Himself. Down with the altars and up with the pulpits that even reached many feet above the congregations. Sermonizing took the place of God, doctrine over and above the incarnation of God Himself. My fear is that man and intellect was placed on the throne, over and against the foolishness of bread and wine made flesh.

And since then, we have beheld enlightenment, then a natural deism, then a new paganism, unto secularism, the isms of revolt with the exaltation of man and intellect taking the place of God in simplicity and love giving Himself to us in unbloody sacrament.

Reason would tell us that either Christianity itself is a farce, or Jesus is made flesh in the Catholic Church and Protestants are under a great deception, as with the rest of humanity.