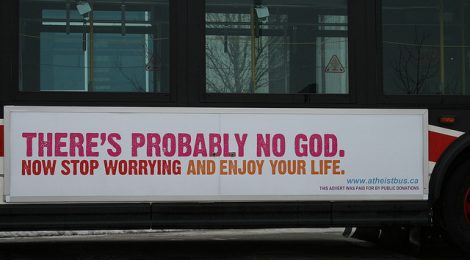 The Atheist is quite alive to God

Steven Thomas / August 1, 2012 / Comments Off on The Atheist is quite alive to God / Reflection

I have observed a euphoria flow out of their being too many times to count, even a rage at the great myth.  Not just at people wrapped in myth, but particularly the Judeo Christian myth.   If only the big brains could observe their behavior.  I have never seen anyone so impassioned about a fiction. They shall try to sidestep my words and point to the historical tragedy of religion gone wrong at times, but they are embittered to no end at the myth.

There is another strange behavior that is hardly deserving of an objective thinker–scorn, scoff, sarcasm flow from them like rivers of smugness.  Finally, what I find the most challenging is a wild glee that often comes forth when they declare that God is a fanciful idea created by the weakness of man.  A strange power comes over them in their proclamation, similar to a religious zealot.

Atheists give a great deal of evidence that God is quite alive.  Only such impassioned hatred could be directed at Person. Fascism, communism, capitalism, as far as isms go, have done great harm to large populations. But only a Stalin or a Hitler breed such contempt.  Only Person can injure at such a fundamental level of our human sensibilities.

I’ve never observed such a man hate a chair, cat, dog, or idea with such zeal.  Well only a person can get such a reaction from a person, and well, God is Person personified.

In other words, God is the ultimate goal of the created order.  We came from Him and one day many shall return to Him.  The Atheist response is all together natural; they demonstrate a proper amount of contempt for God that is natural to them as man in unbelief.  I would worry, or perhaps their atheism would be more believable, if they related to the notion of God as a inanimate idea or object, like a chair or wabble wabbles.  What are wabble wabbles?  My point exactly–jibberish.

They respond to non-conversion just as intensely as the believer responds to conversion, only it is anti-conversion to the person of God. And their behavior demonstrates my point.

So Atheists are an apologetic for the existence of God.  We humans are social creatures.  This is unavoidable, for we were created not for isolation but fellowship, even fellowship with God. Make no mistake, atheists do have a relationship with God, even if it is one of hate.  How tragic!  God is like salt in a wound that is a hard heart, and we observe the social effects within the human person that we call Atheists.