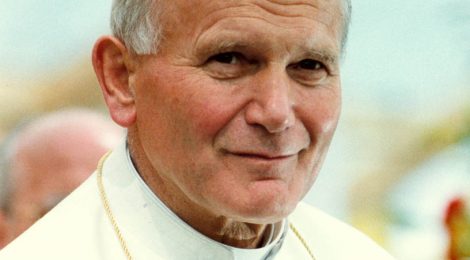 How long has it been since Pope John Paul II called for a New Evangelization?  It preceded my entrance into the Church 8 years ago by many years.  Where are the fruits?  I think we Catholics have become confused.  We catechize, and think we’re evangelizing.  We apologize, and think we’ve explained the Gospel.  But there is a fundamental difference.  To evangelize is to make Christ present, introduce Him first hand, tell someone that salvation is a Person!  I know Him, and you can, too.  The reasoning, the explaining, the catechizing…all that comes later!

The struggle is, I can’t even be sure how many Catholics know Jesus, the Person.  They believe in the Real Presence in the way of a child who is told the way something is, and they accept.  That is good, but there is a further way of knowing.  A knowing which unites our souls to the divine in such a way that it exudes through our pores, changes us fundamentally, and gives us a magnetizing force!

I have heard the phrase, poorly attributed to St. Francis of Assisi, “Preach the Gospel without ceasing.  If necessary, use words.”  I think we should utterly forget that cliche.  Which one of us has every risen to the challenge of preaching the Gospel by our actions?  Which of us can spend even 5 minutes in complete self-sacrificial love?  Which of us can deny ourselves, without grumbling, without rolling of eyes, without acknowledging the ‘greatness’ of our sacrifice in the smallest of our actions.  Yes, the greatest of our Saints could.  But not even all of them.

Be realistic.  Can you live that ideal?  No, for myself and the rest of us, I declare to speak the words.   Until our bodies can live the Gospel, force our tongues to speak it.  Say it until you believe it!

Practice with your children.  Point to the crucifix and tell them, “Jesus, our GOD, loves us.  He wants to be with us, and we with Him forever!  So He became human.  And because that wasn’t enough, He died.  But that is not the end!  He lives and continues to offer Himself, fully and divinely on the altar at every Mass, in every Catholic Church in the world, for YOU!  Just for you!”  It is the only thing which gives meaning to life!   Are you afraid?  Do you feel foolish?  Is Jesus worth becoming a fool for?

I was converted by the Book, the Holy Scriptures themselves, because I was raised to take the Bible literally, and then I read John 6:48-68.  I had only entered a Catholic Church once in my life, when my step-cousin celebrated his First Communion.  It was a huge leap to act upon the conversion that took place in my heart.  So much of the Catholic faith was completely foreign.  But I placed the call and met with the local parish priest.  I had been raised all my life in Christian churches, but never had I ever met a man who exuded love the way this priest did.  I knew he had something.  And he spoke words that every Catholic needs to hear, “I know I am going to heaven, and I want to take as many souls with me as I can.”

Our quiet faith may bring our own souls to heaven, but how many others are you bringing with you?  This is a world that hears the name of Jesus more often in a PG13 movie, than from the lips of believers.  Consider the words of Blessed Pope John Paul II himself, in Redemptoris Missio:

The number of those who do not know Christ and do not belong to the Church is constantly on the increase. Indeed, since the end of the Council it has almost doubled. When we consider this immense portion of humanity which is loved by the Father and for whom he sent his Son, the urgency of the Church’s mission is obvious. On the other hand, our own times offer the Church new opportunities in this field: we have witnessed the collapse of oppressive ideologies and political systems; the opening of frontiers and the formation of a more united world due to an increase in communications; the affirmation among peoples of the gospel values which Jesus made incarnate in his own life (peace, justice, brotherhood, concern for the needy); and a kind of soulless economic and technical development which only stimulates the search for the truth about God, about man and about the meaning of life itself. God is opening before the Church the horizons of a humanity more fully prepared for the sowing of the Gospel. I sense that the moment has come to commit all of the Church’s energies to a new evangelization and to the mission ad gentes. No believer in Christ, no institution of the Church can avoid this supreme duty: to proclaim Christ to all peoples.