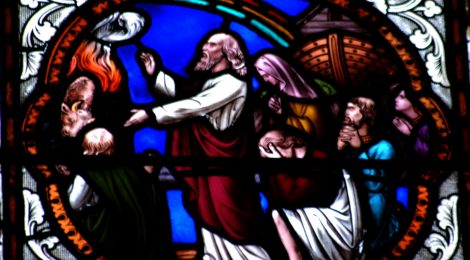 Reflection Genesis 10–The Benefits of Legacy

Steven Thomas / September 18, 2012 / Comments Off on Reflection Genesis 10–The Benefits of Legacy / Through the Bible

Well, when I come against a genealogy in the biblical text I’m going to try to push through with a reflection, if at all possible. So hear it goes!

Noah is the man, a man after God’s own heart.  His faith saved Him, but more than that, it saved His whole household.  Talk about the benefits to be born of the Holy.  In this instance, it was life and death, and it seems that Noah’s daughter in-laws married well, even to the avoidance of death. Their children’s children repopulated the earth. Quite a legacy when looked at from the perspective of Noah’s sons and their wives. Can you imagine being the only survivors of an apocalypse and being chosen to be the ones to bring your species back from near extinction.  Quite an awesome task, all because of the benefits of being born of a Holy man?

The blessings of our associations by birth or marriage have benefits beyond our understanding.  The blessing to the third and fourth generations, whether by the direct providence of God or simply sociological reasons has its lasting effects that at times are the difference between spiritual life and death.

My wife married a Prodigal son and found herself a devout Christian a year and a half after we were married.  From her perspective she won the Jesus lotto, in fact her love for me and gratitude is beyond what most could even understand.  Statistically the longer people go without faith in Jesus Christ the less likely they shall undergo a personal conversion that would lead to baptism.  If the seed is planted in the young through baptism and catechesis you may have to wait awhile but the harvest will often come, particularly when the pigs slop has lost its savor, as it was in my case.

So what of this prodigal’s children?  What benefits have they received by being the children of a prodigal son and a scarlet girl made good?  Where sin abounded, grace abounded all the more.  To reckless youth living lives of sin, being broken by the Savior is a recipe for intense gratitude and fiery commitment and devotion.  So sold out, they made their way back to mother Church while people were exiting in the midst of scandal.  Scandal could not deter these broken souls, for their conversions were scandalous love and mercy from God.

Could they become an Augustine-with-a-little-a or Claire-with-a-little-c? All things are possible with God.  What of their children, twelve in all, one just went to be with the Lord?  The first two raised by heat and passion for the merciful savior have both felt vocations and are in fact meeting with the Bishop tonight for young men discerning the call.  They have received the benefits of our devout life full of love for our Lord.

Shall we be Noah to our sons and daughters, even to their households?