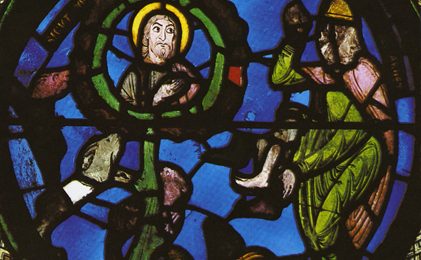 We Wrestle Not Against Flesh and Blood

Bekah / October 2, 2012 / Comments Off on We Wrestle Not Against Flesh and Blood / Exhortation

This verse has been floating around my head for the last week now.  “For our wrestling is not against flesh and blood; but against principalities and power, against the rulers of the world of this darkness, against the spirits of wickedness in the high places.” Eph 6:12  We post frequently concerning the division of Christians and the preference of private judgment over public revelation even among Catholics.  Our belief systems are so innately tied to our personalities and experiences that having those errors exposed can feel like a personal assault.  But it is not with man which is our struggle.  There is so much more going on beneath the surface.

Protestantism has born fruit, beginning within the first generation of its birth: division, anger, rage, pride, rebellion against authority, war, death, and destruction, to name a few.  If this schism was a necessary work of God needed to refine the Church as through fire, then why are these the first fruits?   Have you ever had a conversation with folks who have freshly removed themselves from the Catholic Church?  More often than not, they will list all the ‘errors’ they have become convinced of, but as you listen, watch them.  Do you see the spirit behind their eyes?  I have, and most often it is hate and rage.  These are not fruits of the Holy Spirit!  They are fruits of another spirit, indeed.  Likewise, poke a nominal, cafeteria Catholic.  Ask them about the Church’s stance on birth control, women in the priesthood (or even just a celibate priesthood), or submission to the Magisterium, and very quickly you will see a similar reaction.  What is wrong, here?

There are many good fruits even within our separated brethren, and the Holy Spirit is also in them.  So where does this dualism come from?  What is the ultimate purpose?  The truth is, there is a heavy shadow of darkness cast over the minds and hearts of those who separate themselves from the authority that, for our own protection, Jesus left us with.  I sensed it before I converted to the Church.  It took a conscious act of the will and a genuine desire to see the Truth, whatever it was (never in a million years would I have guessed it would lead me to Catholicism), so that the spiritual blinders I had worn could be removed.  I will never forget the feeling when I read the Bible, as I had done all of my life, and felt as if I had never before read the Bread of Life discourse in John 6.  It was ridiculous, because being raised in an evangelical home, I had memorized bits and pieces of the chapter.  Who doesn’t know, “I am the bread of life come, down from heaven?”  But it did take an act of my will, to fully allow the Holy Spirit to lead me where He may.

It was a struggle, and it still is a struggle in a different way today.  But the profit is, I know my Savior, and I know Him as fully as He intended His flock to know Him.  There is a fire in my love for Him that is kept burning through the continual reception of Grace in the Sacraments.  There is Peace knowing where the essentials lie and where my mind can be allowed to explore philosophically.  There is joy knowing I can spend time in His physical preference as well as in my spirit.  I know I am inside the fold, and the Shepherd defends me against the prowling lion as long as I do not wander.

But those who have chosen their own shepherds among thousands of self-appointed shepherds, you have played into the lion’s hand.  His is a war of divide and conquer.  A house divided cannot stand.  He wages war within and without, and all who fail to acknowledge the steward God established are victim and prey.  He comes so subtly.  He allows enough spiritual confirmation to keep the soul subdued.  He uses fear and self-conceit to maintain division.

Who can know God apart from His revelation, which is the man Jesus Christ?  Who is the Body, but the Church?  Severed from the Body, do you really know Jesus Christ, or are you content to follow Him only so far as you understand?  Lean not on your own understanding…  Remove your blinders and allow the Holy Spirit to be your only guide.  Pray and test my words.  If you consent with your will to be led wherever the Spirit will lead, whatever that might mean, and my words are false, there is nothing to fear.  You will remain as you are.  If my words are true, though, and you reject them–you reject allowing the Holy Spirit to lead you to all truth–what then?  Friends, our war is not with you.  Our war is not with ideas, opinions, or even with interpretations.  Our war is with the author of division, confusion, anger, disorder and chaos.