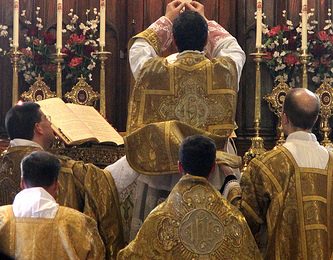 By: Jim, the Photographer

I haven’t been fully forthcoming with you, dear Readers.  This blog is a stretching exercise for me.  I’m not very practiced with verbalizing and sharing my innermost Spiritual experiences, but when I was inspired with the name “Authentic Catholicism,” I felt I was being called to be open with the good and the bad, the heavenly and the gritty.  I also feel an obligation to posting a certain length or at least a complete idea, and if I’m left with an experience that’s open ended, or I haven’t worked through all the implications, it probably won’t hit the blog.  But I’m endeavoring to change that, because sometimes we experience God, but don’t fully understand his work in one go, or maybe I just need to allow the Spirit to move and bear witness.  May it please God.

This weekend we settled in for Mass just as we do every weekend.  Or rather every other weekend, as this was one of Brian’s video-taping nights for the cable presentation of the Mass, which he does on alternate weeks.  I began a Rosary, but was quickly interrupted by our lay Minister who was welcoming guests in the absence of our parish priest.  I generally look forward to Masses when Father is absent, as almost universally we get a more faithful priest and a straightforward Mass.  We actually used the Confiteor, the Gospel was read with personal pronouns intact, and the homily was reverent.  But I don’t think what followed had anything to do with any of that.  Rather, I think it was Ascension and God has been working on my soul in union with the Liturgical Calendar.  Is anyone else experiencing that?

My husband and I had begun praying the Novena to the Holy Spirit, and I have been particularly anticipating the coming of the Holy Spirit this Pentecost.  At the vigil Mass on Saturday evening, beginning as Father Jim elevated the Host, I was overcome with an awe and holy fear I have never felt the like of before.  In a new way, I understood that the God of the universe was present on the Altar!  I could feel tears welling up inside me.  I could hardly expand my lungs to take a breath.  The feeling persisted until the Tabernacle was closed.  When we got home afterward, we pulled up the novena on the computer to pray and I had to stop and explain what happened during Mass when I read that the gift for the day was Fear:  “The gift of Fear fills us with a sovereign respect for God, and makes us dread nothing so much as to offend Him by sin.”