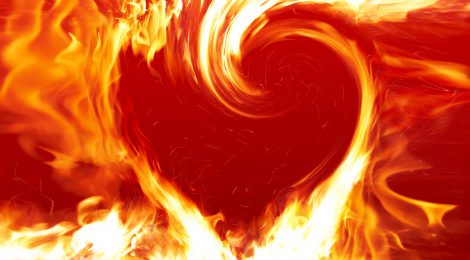 A woman clothed with the sun calls forth from the ends of the earth, “Penance, penance, penance!” A fire never seen enflames the earth; the deserts have been consumed. Men and women of every shade of life, this little band, come forth to ravage the earth with love. They carry a banner before them, “Hosanna, Hosanna in the highest! Blessed is he who comes in the name of the Lord! Hosanna in the highest!”

These little ones forged in obscurity and neglected by the world, but the Church of the First Born has watched. “My sons and my daughters I have seen your travail and anguish, now receive my Immaculata”, said the woman burning with uncreated light.

A burning heart was placed in their core, the center of their being where the great King of the earth has found a throne.  Their faces shown as the sun, their hearts became the sacred fire that would consume the earth with love. Now is the time for the mediatrix of grace to arise.

These little ones had many different stories. Many drank deep of the dark one in their youth, whether through vice and sin or self-loathing isolation. Others had been preserved from such trials. Their lives were ones of interior sufferings, but heaven demanded redemption. The blood of the great King was poured out on them, and they awoke to love. The blood burned away the pain and isolation, at times the pain of the blood burned like a refiner’s fire of eternal light, until they cried out in a single voice, “Hosanna in the Highest, blest is He who come in the name of the Lord, Hosanna in the Highest!”  Heaven awoke with shouts of praise like the sound of rushing waters that ride upon the angel’s wings, ten thousand times ten thousand.

The Immaculata appears before this vast army.  Shining in her face is that of the great King of Kings. She caresses the army with a look and says, “My little ones, I am full of grace.  Come and be united with me in love to mediate for the earth, to be the Incarnation as little redeemers and advocates.  A battle rages before you, the earth mourns. Will you mourn with her? Will you weep over her shame? Will you fellowship with her sufferings? Will you kiss her open sores? Go forth and conquer. No power on earth is greater than love. It is the most violent of weapons against the enemy. Love breaks the yoke, love shatters shame, love destroys the work of the evil one, love and you can laugh in the face of hell. Who will lay any charge against God’s elect? Heart of my heart, bone of my bone; I have become them, they are my conception and I am not ashamed to call them my own. They are the pearl of great price, the treasure hidden in a field. Come into my immaculate heart, and we shall pierce the world with love.”