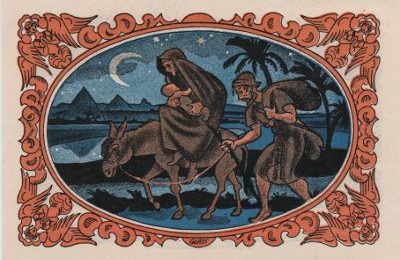 Being convinced of the truth of the Catholic faith is one thing. Living the fullness of the faith after a protestant upbringing, is another.  One of my favorite books as a child was a collection of very short stories of heroic Christian lives.  Most of them were missionaries, just like my grandparents.  But at most, these stories went back one or two generations.  Between the New Testament Bible figures and these modern witnesses lay dust, as far as I knew.

So it was with great enthusiasm that I turned my mind toward discovering and learning about the lives of all those Brothers and Sisters who kept the faith in-between. I felt a new grounding in my faith, that I hadn’t realized I was missing. I felt united to the Apostles and believers down through history, not just through the words of Scripture, but in partaking in the same culture, performing the same movements during worship, keeping the same seasons and feasts through the calendar. None of this really offended my protestant sensibilities.

However, it came time to decide. Was the Communion of Saints a historical witness, or were they a present reality? Can they pray for me, just as my neighbor can pray for me? This was a great leap of faith. At that time, we were a family of five living in a tiny, but comfortable, downstairs duplex apartment. Now that the baby was out of the family bed, we’d divided the two rooms between our daughter and our two sons, and Brian and I pulled out the sleeper sofa every night. It really would be nice to have a house.

As I read through a library book on the Saints, I learned that St. Joseph was patron of house hunters, on account of his searching for an inn for Mary to birth in. And I took that leap. I quietly asked St. Joseph to buy us a house. We had no means to buy a house. I doubted we’d qualify for a mortgage, and we had no savings at all for a down payment. But I prayed, and I went to Mass for the first time, and I prayed again. A large house just down the street went on the market. One day, I boldly knocked on the door and asked if the gentleman wouldn’t mind showing me his house. Five upstairs bedrooms, one downstairs “bedroom”, plenty for our needs, the man himself had raised five children in this house. And the price was quite affordable. But we had no down payment, and no means of pursuing the purchase.

Weeks went by, and out-of-the-blue I received a phone call from the seller’s agent. She wondered if we were still interested in the house (I wondered how she even got our number?), and I explained that I was, but had no means of obtaining a loan. She directed me to a mortgage broker who dealt in special loans. It was worth pursuing just to see what happened, so we called and supplied the required information. I was shocked when the broker called back to say that he needed to transfer our application over to the standard mortgage department, as we had no need of special financing! We ended up needing just a small down payment, which my sister happily gifted us. Less than 8 weeks after I stepped out in faith and prayed for St. Joseph to intercede for us, we had our own home.  The week after we moved into our St. Joseph house, we discovered number 4 was on the way. And now we had somewhere to lay his tiny little head.

← Clarity: The Proven
One Body, One Mediator? It’s a Mystery! →