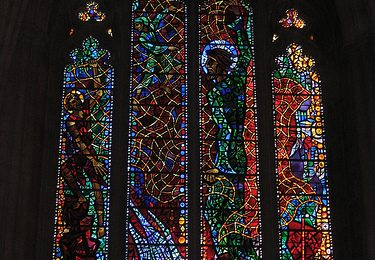 I’ve mentioned pretty extensively in prior posts that I am a dreamer; I did some recent posts about God’s timing, moving in the wave, being hidden, my private crosses, and my attempts at selfless love among other things. Now I’d like to share why I think it is God’s time for me.

What is the justification for this opinion held on my part?  I would like to share with my readers the intimate world I share with my Lord and God, in the hope that you may draw encouragement with me in the waiting within your own lives.

2)  I’ve been given numerous prophecies over the years, both private and personal, that have to do with the multitudes.

3) A life unreflected upon, isn’t worth living. God has been preparing me the day I got saved. I am a blue-collar scholar, a man made for the people. I began reading the day I got saved and have never stopped; I have a great aptitude for theology and nothing else, like a man possessed. Prior to conversion, my great goal was never to exert my mind.

4) I’ve seen ridiculous fruit in different seasons, particularly related to preaching the gospel; I would relate these as seasons of preparation and not my vocation.  Crazy power-encounters as well, all precursors, much of the time has been more about burning off the chaff in me more than anything, and for God, that is the real challenge.

5) I’ve faced my greatest fear and pain this last year and fought for freedom in the depths that I also have shared regarding my wife and our beginnings.

6) These things are all circumstantial, while dreams from God, yes, are subject to interpretation, yet this is how the Lord has communicated with me over the years starting at 30 years of age.  God has come to me in dreams about my private sins, the sins of others–those are the worst–the condition of the Church, the reason many are outside the Church, private direction and encouragement, even calling.

So this is why I think it is my time, many months ago I had a series of dreams four nights in a row. This was highly unusual, but for me, substantial.

The first dream was full of color and encouragement.  I saw the Virgin all night, in many different garments, like a wardrobe display of light, like a runway of the woman showing all these different garments. The last thing I see is the Lord, but not as a photo, but live in dream state. He is wearing a plain white tunic, His glory is hidden and HE reaches His hand out to me and hands me a gold medal. On the medal itself is the same image of Him extending his hand to me only in His hand is nothing short of a teddy bear. I wake. This is the first and last time I have ever seen Him in any state of mind, and He does look like the pictures. I felt the shroud of Turin was the closest image to His likeness, according to what I saw.

The mantle of a Teddy bear.  OK Lord, I think the teddy bear may have been Mary’s non-threatening presence. Could I have an ax or sword or something instead? 😉

I may sound harsh or stern in my thoughts on paper, but in real life I come off as a Teddy bear on fire.

The next night, I dream about an old man in a boat.  He calls me over and tells me I have won a reward for communicating the beauty of the Lord.  He crosses a marsh and takes me to two men to receive my reward.  I was even told a specific number amount.  Now I’ve received miracle provision before, many times, but nothing close to the amount spoken.  I have received miracle provision in the hundreds, even thousands in the past, without ever asking for a single penny.  If the Lord asks us to do something he’ll pay for it, the real challenge is to know whether it is the Lord  or our desires pressing upon God and His initiatives.

As we approach the two men. They begin to stare intently at the old man.  One says, “Why is there light at night coming out of his hut in the marsh.  There is no electricity out there.” The other responds, “Because he is luminescent.  He is an angel.” At that moment I look at the angel and he disappears. I awoke.

The third day’s encounter happened the moment I woke the next morning. This is the real seal for me in this series.  It’s never happened before, at least to my knowing.  I had a locution.  I’m not sure if it was interior or audible but I know it was real, or at least as sure as I can be. Why do I say this?  Because it was in Latin. This is what I heard:  “The Church has failed to implement Gadium Et Spes.” I’ve read the documents but no Latin for this simpleton, the only document title that I know off hand in the Latin is Humane Vitae.  I got up and thought that it might be an encyclical or church document, so I went down the stairs and looked it up.  It is the fourth and last dogmatic constitution in Vatican 2.  Translation: “The Church in the Modern world, or evangelizing the modern man for Jesus Christ.”

One more night, one more dream that sealed this series shut.  I saw the Lord as a concrete statue, he was sitting bare-chested, robed from the waist down.  His arms were outstretched in crucifix position but His hands were closed in a fist.  He wore a crown on His head, but it was a crown of Roses. Simple and direct.

The paradox of the Lion and the Lamb, the King of Kings, but He is the King of love.  His love is not a limp wrist, but a fist ready for battle, terrible in holiness and terrible in love.  Set in concrete because this has more to do with whom and what He is as person, unchanging.  What can we do but weep before His majesty?

This series I would relate to a commissioning that begins with His mother’s love for this little one, a mantle of tender love given, a message to be given as a directive, and the one in whom I speak.  The economic dream has to do with my faith or lack of.  The platform on which I carry out this task remains to be seen.  I am a street preacher by passion and this is where I’m most at home, but only time will tell the where and how of this task given and I’ll leave that for my next post.