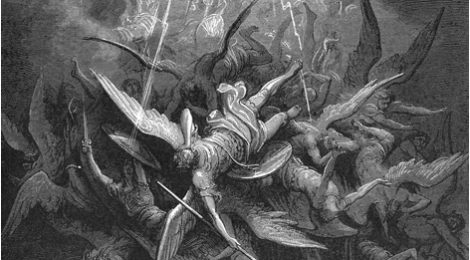 Imagine a war in heaven.  Imagine God establishing a Kingdom on earth, where men are vulnerable to themselves, and a great evil that at one time had a place in the heavenly kingdom.

What would that Kingdom on earth look like? It would be huge and two thousand years old. It would be the place where heaven and hell verge, where the battle for humanity would be fought. A place where heroes are made and battles would be waged. A place where conspirators and traitors would slither their way in and wreak havoc.  From without, enemies would constantly be attacking, not because it is dark, but that the enemy would be motivated to attack her perpetually from all sides, and attempts to cast a darkness over her, to demonize her, to call light darkness and darkness light.

The great enemy would not care who was fighting against her, as long as they were fighting her, a war of words, of ethics, morality, truth itself. From without the only unified front is a mob, even thousands of tribes of people–some friends amongst the mob, others enemies.  They vary fundamentally themselves; some are called atheists, others Protestants, others Secularists and everything else in between. Their only unity is that they attack her from without, laughing at her claims.  They have come under the great delusion that the Kingdom established is a Kingdom of darkness.  Wow!  Incredible, even lovers of the King hate His Kingdom.  Is such a thing possible?

The dissemination of misinformation has been a great assault, because they believed the lie because they wanted too. At the base of this diabolical unity is rebellion.  You shall not rule in the King’s stead; some want to over throw the King himself.  Others refuse to submit to His governance, thinking He has made them master of His household.  While others see the King and his Kingdom as dated myth that needs to just go away so man can move forward in his social evolution.

The greatest weapon the enemy uses is poor man himself, turning him against himself, hating his own refuge, his own freedom. Using man to destroy himself, the battle field is the mind, prejudice.  If he can harden the heart, the mind becomes incapable of reason.

Corruption from within its wall furthers the process; darkness of those within her gates and without, darkness is the goal, a loss of faith, hope, love, and trust. Deceiving all and all being deceived.  The only ones that are safe are the pure of heart. They know the truth, because it has set them free.  The teachings haven’t changed, just the corrupt men that teach them.  For many do not believe them themselves; this is also a great work of the enemy. Divide and conquer from within and without.

A mob of sleepers grope around within its walls asleep in lethargy, like they are intoxicated by a drug called ‘who cares.’  Many a zealous within its walls are secularists clothed in Catholic clothing, thinking themselves to be liberators, when all they are are traitors of the King in need of redemption.  Their plight is worse than those from without, they know Judas.

A formidable foe the enemy is.  Who shall escape but the pure of heart?  To see the Kingdom of our Lord and Christ in heaven is life and peace, and many enter therein, to see His Kingdom on earth is not quite so romantic. It is a place of war between heaven and hell.  Strike the shepherd and the sheep will scatter; the deceiver has created a division in many people between the Kingdom of heaven and the Kingdom on earth. Jesus Christ is the same King over both realms.  Shall we know our place within both and be unified in ourselves.  On earth, as it is in heaven.  The gates of heaven shall not prevail, even if many from within and without have lost themselves in the enemies camp, for the real war is against light and darkness. Come, we Catholics faithful to the lamb, we happy few, let us fight!