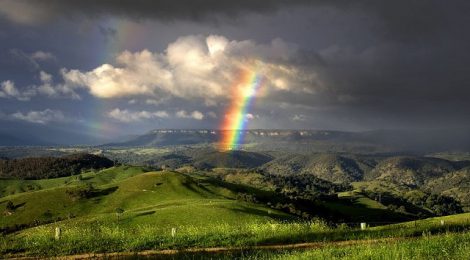 Steven Thomas / September 16, 2012 / Comments Off on Reflections Genesis 9–Heaven’s Bow / Through the Bible

If Jesus is the second Adam then Noah could be likened to an Adamic prototype.  Instead of being created out of the earth he came forth from the waters, through a sort of baptism, he and his entire household.  The same command is given on coming out of the Ark as with our first parents, be fruitful and multiply.

The days of the garden are gone yet God gives His promise with a sign, the rainbow. I articulated in my last post his gift to God that is emblematic of the promise to come, the eternal sacrifice.

For now promise in mystery begins with the sign of the bow. Rainbows are captured by reflective light of the sun hitting the mist in the atmosphere. Color is even more fantastic in that our eyes can see light in modes of color reflecting off objects, in this case mist. The spectrum of the rainbow is of seven colors yet in truth it is simply different shades of light that our intellect attempts to make sense of. I got a D in high school science.  I’m hardly an authority on physical science.

But when it comes to the things of the Spirit I have a sort of aptitude of seeing.  My editor calls me a theological savant. So what is the great significance of the bow that this mystic gets so excited about?

It has to do with what the eastern Christians call uncreated light, and yes it is a part of the Catholic tradition but not as much emphasis is placed on it. God is light, which means the radiance emanating off the triune God is eternal light. Not a fourth person of the trinity, but eternal energy within God, like power from the source that never cools, or darkens.  What is grace one might ask?  It is the uncreated light of God. His Spirit inhabits us at new birth, but His energies work through us.

And frankly if you don’t know His energies, you need a baptism of fire. All Christians from all denominations experience this presence to varying degrees according to gift and calling.  This is what confirmation is all about, a baptism of fire. Some call it the anointing, theosis, a second baptism, the glory, the presence of the Lord.  If you have not encountered the power of the living God, simply ask!  Lord fill me with your Holy Spirit!  Keep asking until the visitation comes.

So what does all this have to do with the rainbow? In heaven, the beatific vision as Christ is in His natural form is man coupled with deity clothed in the uncreated light. Around the throne is a rainbow, except it is an entire circumference, complete and never ending glory, not a promise but the substance of the Noetic promise. The deification of man in the God man, the bow is not simply a promise that God will not destroy the earth by deluge, but rather man is made for divinity in Jesus Christ. We have baptism, altar, sacrifice, and bow, the song of our redemption in primal form.

So the next time you see a rainbow think of the Son of man radiating light surrounded by the bow and know it is your destiny.